The founder of our order – St. John of God 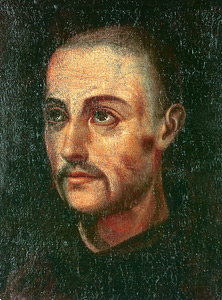 João Cidade was born in 1495 in Portugal. He was looking for the meaning of his life over several decades as a herdsman, a soldier, a craftsman and also a bookseller.

In 1539 he heard a sermon of Saint John of Avila in Granada in southern Spain, which touched him deeply. He lost his inner balance, he gave away all his belongings and was brought to a hospital as an assumed mentally ill person. There, John learned about the distress of the patients, especially about the misery of the mentally ill people. These experience touched him deeply and generated the desire to put up a hospital based on new norms.

After his dismissal he began to collect ill people from the street and took care of them under the archway of the house of a befriended family. The proverb “The heart is the commander”, which was written on the archway, served him as a guiding ine. During the next years, John established another hospital in Granada, where he was able to take care about more and more patients and found several soulmates, who joined him and who shared his ideas.

In comparison with the contemporary behaviour his attitude towards patient care was revolutionary. In his hospitals every patient received their own bed. John also separated patients according to gender and type of illness, called pastors to his house, recorded written data about patients for the first time and thus became the forerunner of modern hospitals.

John of God died on 8 March 1550. Two decades later the “hospital brothers” found his religious recognition by Pope Pius V. In 1630 John of God was declared for blessed, in 1690 for a saint and later also for a patron of the ill and all those who care for them.

He is celebrated on 8 March, and his motto is